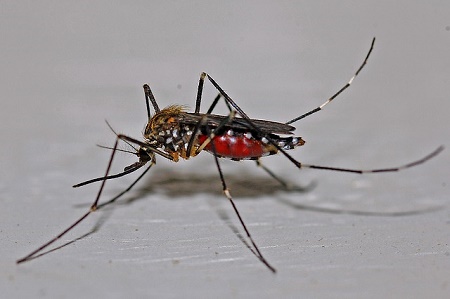 National Geographic.com tells us that “few animals on Earth evoke the antipathy that mosquitoes do. Their itchy, irritating bites and nearly ubiquitous presence can ruin a backyard barbecue or a hike in the woods. They have an uncanny ability to sense our murderous intentions, taking flight and disappearing milliseconds before a fatal swat. And in our bedrooms, the persistent, whiny hum of their buzzing wings can wake the soundest of sleepers.”

“Beyond the nuisance factor, mosquitoes are carriers, or vectors, for some of humanity’s most deadly illnesses, and they are public enemy number one in the fight against global infectious disease. Mosquito-borne diseases cause millions of deaths worldwide every year with a disproportionate effect on children and the elderly in developing countries”

“There are more than 3,000 species of mosquitoes, but the members of three bear primary responsibility for the spread of human diseases. Anopheles mosquitoes are the only species known to carry malaria. They also transmit filariasis (also called elephantiasis) and encephalitis. Culex mosquitoes carry encephalitis, filariasis, and the West Nile virus. And Aedes mosquitoes, of which the voracious Asian tiger is a member, carry yellow fever, dengue, and encephalitis.”

“Mosquitoes use exhaled carbon dioxide, body odors and temperature, and movement to home in on their victims. Only female mosquitoes have the mouth parts necessary for sucking blood. When biting with their proboscis, they stab two tubes into the skin: one to inject an enzyme that inhibits blood clotting; the other to suck blood into their bodies. They use the blood not for their own nourishment but as a source of protein for their eggs. For food, both males and females eat nectar and other plant sugars.”

“Mosquitoes transmit disease in a variety of ways. In the case of malaria, parasites attach themselves to the gut of a female mosquito and enter a host as she feeds. In other cases, such as yellow fever and dengue, a virus enters the mosquito as it feeds on an infected human and is transmitted via the mosquito’s saliva to a subsequent victim.”

“The only silver lining to that cloud of mosquitoes in your garden is that they are a reliable source of food for thousands of animals, including birds, bats, dragonflies, and frogs. In addition, humans are actually not the first choice for most mosquitoes looking for a meal. They usually prefer horses, cattle, and birds.”

“All mosquitoes need water to breed, so eradication and population-control efforts usually involve removal or treatment of standing water sources. Insecticide spraying to kill adult mosquitoes is also widespread. However, global efforts to stop the spread of mosquitoes are having little effect, and many scientists think global warming will likely increase their number and range.”