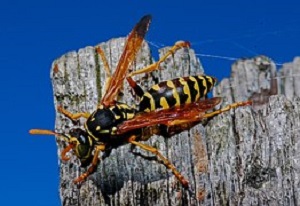 With warmer weather approaching, many flying and stinging creepy crawlies will be making their way our of hibernation and be back in business again.  Wasps are just one of many of these troublesome critters that can make life difficult if they are too abundant.

According to NationaGeographic.com, “wasps make up an enormously diverse array of insects, with some 30,000 identified species. We are most familiar with those that are wrapped in bright warning colors—ones that buzz angrily about in groups and threaten us with painful stings.

But most wasps are actually solitary, non-stinging varieties. And all do far more good for humans by controlling pest insect populations than harm.

Wasps are distinguishable from bees by their pointed lower abdomens and the narrow “waist,” called a petiole, that separates the abdomen from the thorax.

They come in every color imaginable, from the familiar yellow to brown, metallic blue, and bright red. Generally, the brighter colored species are in the Vespidae, or stinging wasp, family.

All wasps build nests. Whereas bees secrete a waxy substance to construct their nests, wasps create their familiar papery abodes from wood fibers scraped with their hard mandibles and chewed into a pulp.

Wasps are divided into two primary subgroups: social and solitary. Social wasps account for only about a thousand species and include formidable colony-builders, like yellow jackets and hornets.

Social wasp colonies are started from scratch each spring by a queen who was fertilized the previous year and survived the winter by hibernating in a warm place. When she emerges, she builds a small nest and rears a starter brood of worker females. These workers then take over expanding the nest, building multiple six-sided cells into which the queen continually lays eggs. By late summer, a colony can have more than 5,000 individuals, all of whom, including the founding queen, die off at winter. Only newly fertilized queens survive the cold to restart the process in spring.

Solitary wasps, by far the largest subgroup, do not form colonies. This group includes some of the wasp family’s largest members, like cicada killers and the striking blue-and-orange tarantula hawks, which can both reach 1.5 inches (3.8 centimeters) in length. Whereas social wasps use their stingers only for defense, stinging solitary wasps rely on their venom to hunt.

Most animals have developed a well-earned fear of stinging wasps and give them a wide berth. Creatures who haplessly stumble upon a wasp colony or have the audacity to disturb a nest will find themselves quickly swarmed. A social wasp in distress emits a pheromone that sends nearby colony members into a defensive, stinging frenzy. Unlike bees, wasps can sting repeatedly.”

While beneficial to our ecosystems, wasps can be a real problem, particularly for children or those with allergies.  At Homestead Pest Management, we can help you prevent or get rid of wasps and other flying and crawling pests. Contact us today for a professional assessment of all your West TN pest control needs!